To select the right figs or pears or olallieberries for each bowl, Chez Panisse’s kitchen staff carefully tracks the ripeness of each one, sorting, sniffing, and prodding them throughout the day. The goal of the dish is to celebrate not just the bounty that the restaurant receives from local farmers daily, but its innate potential. It venerates an Edenic ur-fruit, and invites the diner to the table to worship as well. For Carolina Herrera’s 2023 resort collection, designer Wes Gordon similarly devoted himself to an essentialist fruit print that adorns a number of his pieces. On a billowing off-the-shoulder dress, demure but for the collarbones it bares and a playful high slit, supersize red cherries the size of a toddler’s fist seem so ripe they might bleed into their cream-colored background. It’s the sort of thing you might wear while strolling through an orchard at golden hour, if you trusted yourself not to stain the dress with the juice of just-bitten fruit. 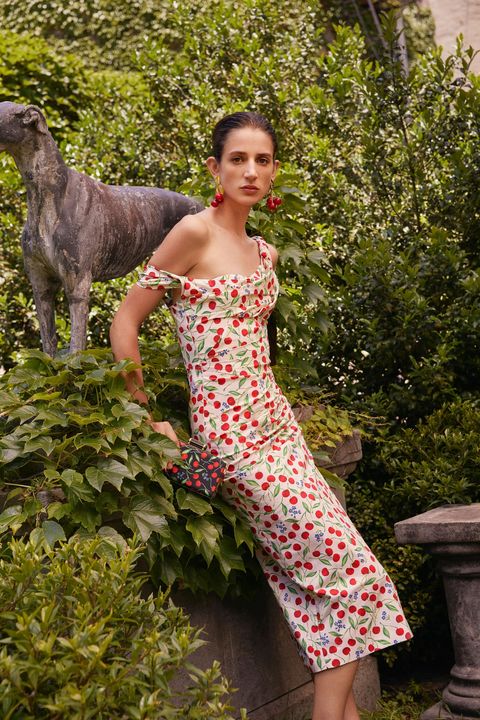 Courtesy of the designer.

It’s the first food print that Gordon can remember at the label. “I think the key thing about conversation prints is that everything we do first and foremost has to be beautiful and joyful, so that irreverence can never supersede beauty and something that you want to wear,” he said. “And in this case, the cherry perfectly combines both of those.”

More elaborate dishes, which have recently infiltrated the fashion world’s parties and installations in the form of rococo seafood towers and avant-garde cakes, are finally popping up on runways, too. For the fall and resort seasons, a smattering of dresses have been covered, or garnished, with food: a sequined yellow Bottega Veneta slipdress is embellished with the outlines of lemons on the stem, glistening with sequined dew; a Gucci dress wears a cheeky but sophisticated ice cream print; a Collina Strada party dress is printed in astral- projected kiwis. Moschino has taken up a cherry print, too, in a Pop Art ’70s combination of lime green and orange. 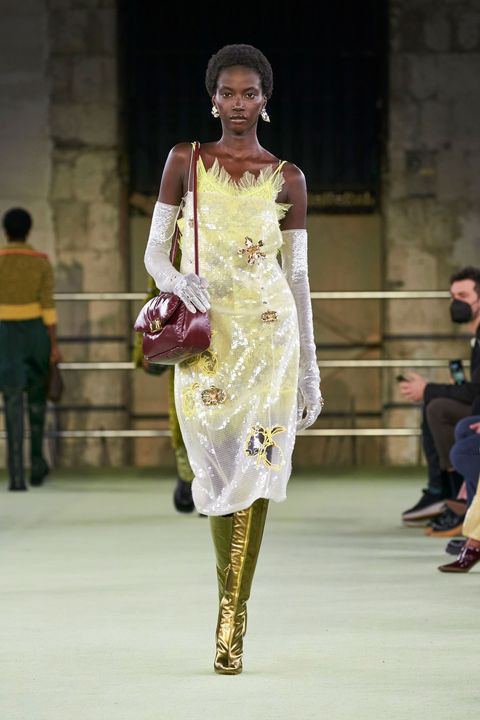 Courtesy of the designer.

If the first wave of Pop Art glorified the supermarket soup cans and diner hamburgers of postwar America, this new culinary-sartorial wave of the genre insists on luxury. It’s a simple visual language that communicates lusciousness, opulence, and that one thing everyone craves—time off. Last fall, art director and designer Todd Heim launched a line of homewares called Chez Diane, after his drag name, Steak Diane, including blue-and-white gingham bibs with lobsters already printed on them. This year, Rachel Antonoff released a blue gingham dress carrying an entire seafood tower. These aren’t foods you fuss over—they’re foods you enjoy.

A seafood tower commands attention if only because it takes up the diner’s entire field of vision. You could just order a plate of oysters, but why not turn them into a sculpture? It’s “something you’d order on a special occasion,” explains Antonoff, who has also been working with a pink-and-orange prawn print since 2019. “It’s celebratory food, [not] sustenance food.” 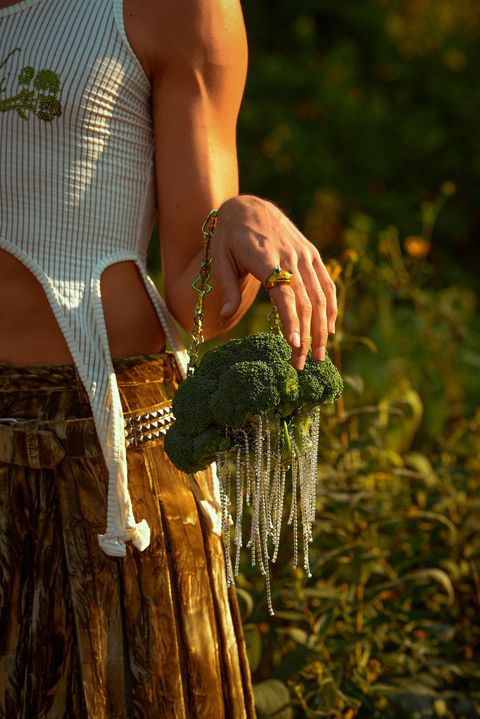 The luxury that these treats promise isn’t always purely financial, either. “Fruit is tied to ideas of luxury and rest in a way that other foods are not,” explains Khushbu Shah, restaurant editor of Food & Wine. “Time is something that people often forget is one of the greatest forms of luxury. The idea of lying around, and having a plate of fruit that has been prepared for you to just sit there and eat.”

These motifs also represent an increased identification with food on the personal level. “Your food preferences are a form of self-expression,” Shah says. Antonoff, too, notes that many of her customers are driven by emotional reactions to her pieces: “We get so many emails that are like, ‘Oh my God, my friend needs this.’ I think people feel a sense of ownership over their hobbies and likes.” Next spring, she plans to debut a Key lime pie sweater; an Aperol Spritz dress will appear in summer.

On the Gucci runway, food motifs took a more casual turn. One was an ice cream social in a dress: a breezy, almost boho shape dotted with Technicolor outlines of ice cream cones. Despite the dress’s sophistication, it reminded you that an ice cream cone on a hot day is a dare: Eat me before I ruin your shirt. It threatens first a napkin, then a hand, running down a wrist as you speed up your consumption in the hopes of victory.

Food prints on clothing contain a contradiction: They suggest mess while exuding its opposite. What happens if a woman eats a luscious cherry in her cherry-printed dress? “I tell women buying Herrera wedding dresses, don’t treat it preciously,” Gordon says. “Live fully in it. And if that means spilling on it or staining it, give the dress a glorious death.”

This article appears in the December/January 2022/23 issue of ELLE.

Marian Bull is a writer and potter living in Brooklyn.