In season 2 of The White Lotus, Meghann Fahy is uncomfortably convincing as the elegant, affable Daphne, an out-of-touch housewife who just might be more dangerous than she lets on. We know multiple bodies pile up by the time showrunner Mike White’s sophomore chapter draws to a close. Who’s to say Daphne—with her Aperol spritz and bohemian swimsuit cover-up never far from reach—has nothing to hide?

The Bold Type actress is as equally sunny in an interview as she is on screen, making it obvious why White sought to hire her for season 2 after Alexandra Daddario beat her for a role in season 1. Fahy auditioned via self-tape, Zoomed with White and his crew, and found out she’d earned the part only a few weeks before she was expected in Italy—where she’d stay for the next five months. She packed up her home in Los Angeles and settled into a new, temporary, glittering life in Sicily.

There, she found an insulated camaraderie amongst her cast mates, including Theo James, who plays Daphne’s finance bro husband, Cameron. In episode 3, the two’s foolproof marriage seems punctured when Cameron’s infidelities are revealed—only for Daphne to insist, smiling, that she’s no victim. Cameron can play his games; she’ll play hers. And somehow, they’ll end up…happy?

Below, Fahy discusses the surreality of living like the hotel guests you’re playing on TV, as well as the tricky dynamics of Cameron and Daphne’s true love.

How long were you in Italy filming?

We wrapped the end of July…I think we originally planned to finish end of May. But nobody was really complaining about being there for longer. I was like, “Do you need anything else? I could stay for two more months.”

Like, “Are you sure we don’t need to do some reshoots?”

Start again from the beginning. 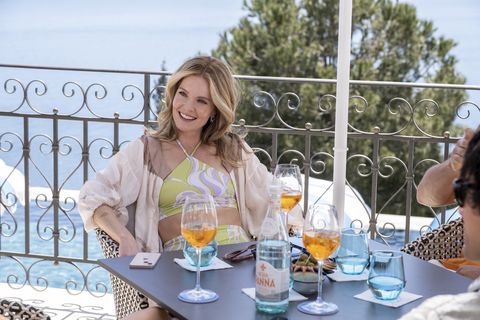 Fahy as Daphne Sullivan in The White Lotus season 2.

Tell me about the experience of those five months. You’re living in this beautiful, exclusive resort for weeks on end, but there’s a dark undercurrent to the work you’re doing. How did you, as a cast, set the tone while you were living in this splendor?

I think the environment certainly facilitates that. Being in a beautiful resort with all of the views and everything, it really does help you just sink into [the tone]. It was an experience that I personally have never had. I don’t travel that way. I think that’s true for most of us who were doing the show. But it was really funny, because when we were shooting there for the first two months, it was [the hotel’s] off-season, so nobody else was staying at the hotel. And then the hotel opened to the paying guests, at the beginning of April, I think.

We were staying there while we were watching [the employees] get ready for everybody else to come. They were shampooing the carpets and they were painting the walls, and there were huge flowers being brought in from every direction. And then you started seeing it fill in with real people. And that was kind of a strange experience, because you’re starting to mingle and sit at the bar, or sit at breakfast, next to people that you’re, in a way, embodying for the sake of the show. So it was pretty interesting.

Wanting to be a part of this series was, as you put it, a “no-brainer” for you. But what about Daphne, in particular, felt like the right fit?

Well, I love Daphne for a bunch of reasons. She sees the world and her relationship to it a little bit differently than some of the other people that she’s with on the trip. But I think also her innate warmth is something I enjoyed about her, because these characters, a lot of their qualities are quite unlikable. I think, as actors, we often enjoy playing people that are super likable because we want to be liked. Everybody does. But I think the more you could lean into the unlikeableness of these characters, the better it is. 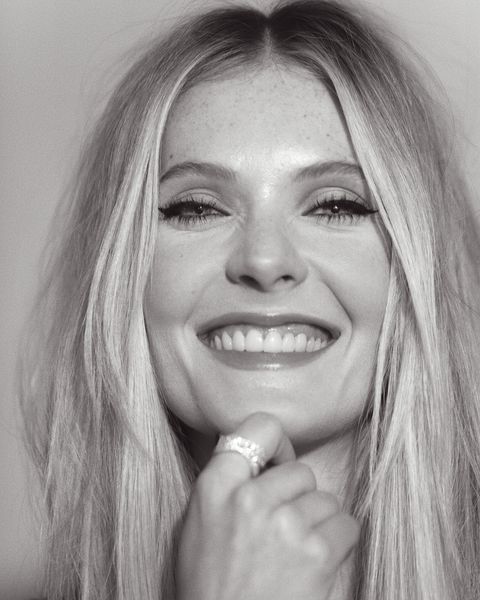 In episode 3, we get a closer glimpse at that “unlikeableness” through the lens of Cameron, whom we learn has cheated on Daphne. But she plays mind games in return. Given the natural ways in which Cameron has more power in their relationship—he’s a man, he makes the money, he’s more physically powerful—how did you find that Daphne steals that power back? How does she make this relationship more even?

Mike was very clear about Daphne not being the victim, from the beginning. But also, it never really felt like a power dynamic that was uneven to me, between the two of them. Cameron and Daphne, they both have a very specific role that they play in the marriage, and one is not greater or lesser than the other. You’re meant not to think that’s the case at the beginning. Episode 3, you start to realize that it is, and that only continues for the rest of the series.

Which, again, is a really smart thing that Mike did. Because I think we’ve seen that dynamic a hundred times: where the woman is in a less powerful position, and either needs to stay with the husband because he makes the money, or lets him do whatever he wants because she thinks, Well, I’d rather be with him like this than not be with him at all. And I don’t think that Daphne subscribes to either of those ideologies.

The reason they both engage [in mind games] is because they both genuinely get something out of it that serves them in some way, whether or not that’s twisted and dark. I think Mike is asking, “Well, is that relevant? Does it matter? Does it matter how they get satisfaction out of their relationship if they’ve got it?” Because so many people don’t. And so, here we are, watching this couple play out these really weird mind games with each other that are unconventional—and, from a societal standpoint, probably a little bit not great—but they’re happy, truly.

When Mike was directing you in this character, what did he convey to you as Daphne’s primary motivations? Who—or what—is she meant to represent?

Mike is great. He will answer any sort of question that you ask him, but he is generally not super concerned with all of that character work. And I think, as an actor, that’s liberating in a way. Because it’s written so well that, truth be told, all you really have to do is say the words. So we didn’t even have that many deep conversations about it, to be honest. And I think it allowed me to experience the character in real time.

And she, Daphne, taught me a lot of things about her in the process of me just playing out the scenes. I think all the context clues for the characters are just in the script. The more we were shooting, the more in the character I think everybody felt, because [White] made it so easy to slip into these people. And I think all of us at a certain point were like, “Are we these people? Did we become these people? Is that what’s happening?”

They could make a reality show about the filming of The White Lotus that I think would be just as riveting.

You mentioned the scene between yourself and Aubrey Plaza, where Daphne tells her character, Harper, that she’s “not a victim.” That line could easily skew defensive, but the way you deliver it is completely matter of fact. Why did that delivery make sense to you in the moment?

Well, a conversation that Theo and I did have with Mike at the very beginning, before we started shooting—and I think the thing that felt most important for Mike to tell us—was these are two people who are genuinely in love with each other. Their affection is true; their affection is real.

We have Aubrey’s character, who serves as the audience’s eyes. I think we experience the world through her in a lot of ways. So she’s posing this question: “I think [their relationship is] fake. I think it’s bullshit.” But I knew from the beginning that wasn’t true.

In terms of that scene and that line delivery, you’re right. It’s almost written in a way where you can hear it as being a super defensive thing to say. But not if the person is telling the truth. 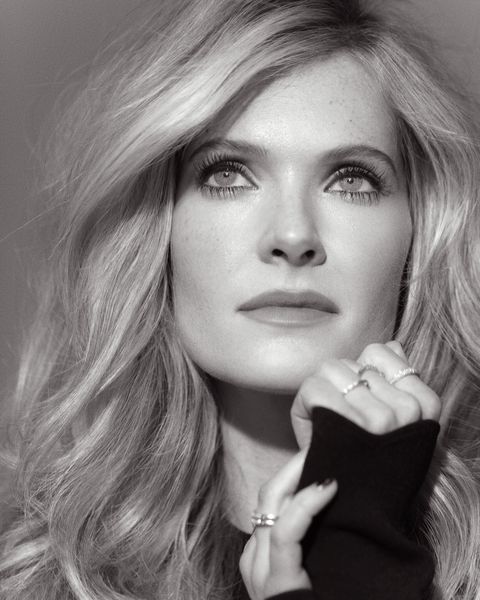 Several critics have argued you’re set to become the breakout this season. What has it been like for you to read that, to experience it in real time?

So I definitely feel that energy of excitement. For me, I hate watching myself, but I can’t wait to watch the show, because I can’t wait to see what everybody else is doing. Everybody’s just so fantastic. So yeah, it’s definitely a really, really special moment, and I’m trying to enjoy as much of it as I possibly can.

This interview has been edited and condensed for clarity.

Lauren Puckett-Pope is an associate editor at ELLE, where she covers film, TV, books and fashion.