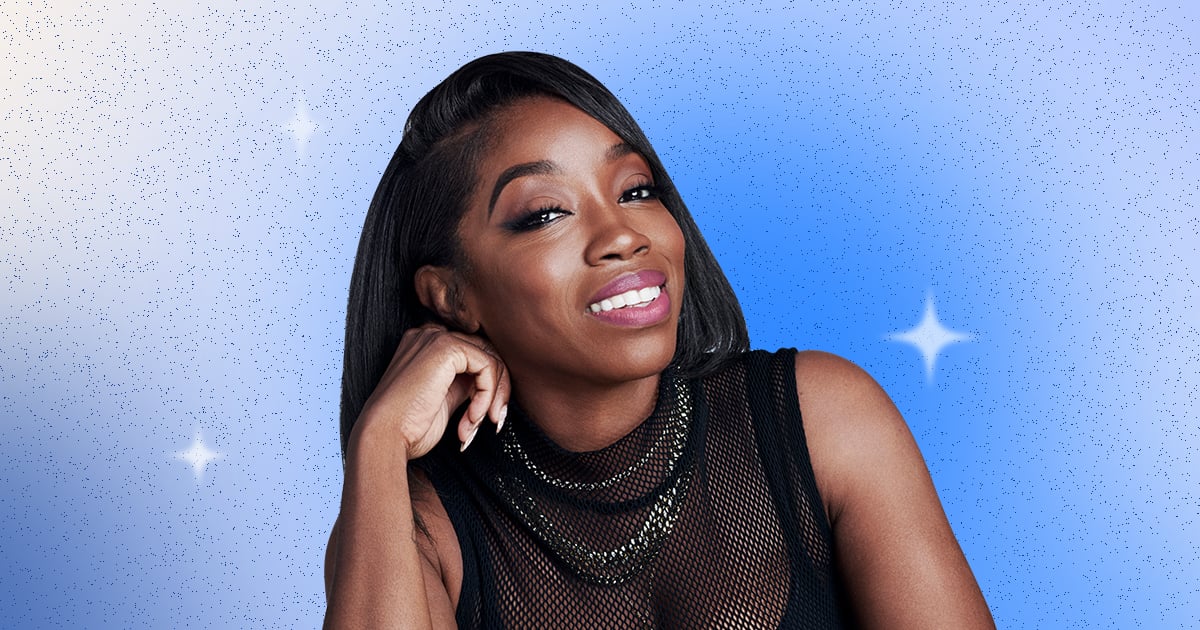 POPSUGAR’s How Does She Sleep at Night takes a peek under the covers of admirable women’s wind-down routines to reveal their nightstand staples, sleep schedules, and dream lives.

As an international recording artist, Estelle has clocked lots of late nights on the road, on stage, and in the studio. But all that burning the candle at both ends stopped a few years ago when she decided to focus on “balancing out her life” and taking back her time. She let it be known that she was done with late-night recording sessions, for one. “You’re not going to put me in the club, put me on the road for 12 hours, and then tell me to go to the studio. It’s not happening like that,” she told POPSUGAR. “We’re not overrunning my time with your version of what I’m supposed to be as an artist.”

These days, the radio host and singer-songwriter is no longer letting other people dictate to her when it comes to when she works and when she sleeps. The stakes are just too high. “I’ve lost my memory at times because I haven’t been sleeping really well,” she told POPSUGAR. “And then I’ll get on stage, and haven’t slept properly, and I forget the song lyrics — to, like, ‘American Boy’ and sh*t! It’s like, this is the song that’s on autopilot, written in the back of my soul.”

While Estelle figured out that “sleep is paramount” years ago — and started putting that learning into practice — she said she was amused to see that wisdom grow in popularity as the pandemic hit. “People started to really realize, ‘Oh yeah, you really cannot go that much.’ And I was like, ‘I was telling you the things!'”

So how does the host of The Estelle Show, which airs every weekday on Apple Music, wind down once her work is done? Read on to find out.

When we caught up on Zoom, Estelle’s skin looked clear as a bell and glowing as can be, but she insisted it was acting up. “I just did a peel, so my skin has been fighting me for the past few days,” she said. When her skin is crabby, she swears by Effacé by Roberta’s #HealMeBaby Aloe Cort Cream ($37). “That just calms everything down. My face was raised here and here, and having a time. And it just went, ‘Shh,’ overnight.” She’s also big on hydration, layering on Biossance Squalane + Tea Tree Oil ($49) and Laneige Water Mask ($25) before she hits the lights.

“I keep crystals on the side of my bed, ones with copper and shungite ($16),” Estelle told POPSUGAR. “And I also love rose quartz crystals and things like that, just to keep the energy [and] instill good vibes around the bed.”

The Traditional Sleep Aid Always on Her Nightstand

Estelle always keeps a bottle of brewed sorrel ($2 for 24 tea bags) by her bed. (Sorrel is a Caribbean hibiscus drink.) “Sorrel’s a really good sleep aid. It’s a natural drink we grew up drinking my whole life, and now I make it and I drink it every night before bed,” she said. “If you want to precious sleep, like go so deep into your sleep, drink a whole bowl. I just take sips, because I don’t like to sleep that deeply, ever, in life.”

Frette-Level Sheets For a Fraction of the Cost

Estelle loves all things silky and luxurious when it comes to pajamas and bedding. And while she’s a huge fan of pricey Frette sheets, she also has a much more affordable dupe she’s obsessed with. “Because Frette’s quite expensive, I also like silky bamboo sheets ($44 for a queen set),” she said. “It’s the most luxurious frickin’ material to slide into in bed, and you don’t sweat. You can get it on Amazon in so many different colors. You just feel like you slid into joy.” [Editor’s note: I can confirm that after this interview, I bought these sheets, and my life has exponentially changed for the better.]

Napping Anywhere, Anytime — and Maybe During This Interview

Estelle’s mastery of the nap should not be underestimated. “It’s a skill, and I’ve mastered it,” she assured me. “I find myself being able to sleep through people talking and still know what they’re saying. You can be having a whole conversation with me — I’m asleep, and wake up, and catch the end, and know exactly what you were saying.” So, did Estelle nap through this interview? That’s for her to know and us to never find out.

Where Kourtney Kardashian and Travis Barker Really Stand Amid Engagement Rumors
Golden Slams Don’t Happen Very Often in Tennis, but a Few Could This Year — Here’s How
Are Kourtney Kardashian and Travis Barker Engaged?
Blake Lively Speaks Out Against Paparazzi Who ‘Stalked’ Her and Her Kids: ‘It Was Frightening’
How Does Kin Euphorics Cofounder Jen Batchelor Sleep at Night?