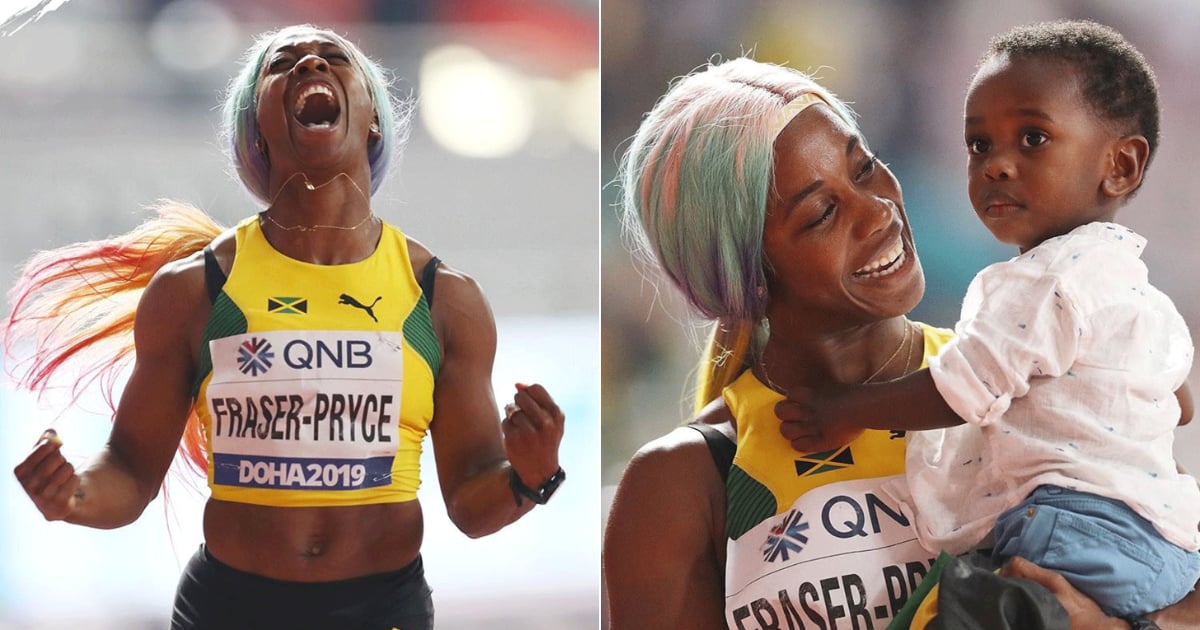 Shelly-Ann Fraser-Pryce is one of the world’s most dominant sprinters. At 32, the Jamaican athlete has been to three Olympic Games and medaled in each one (two golds, three silvers, and one bronze), and that’s not even mentioning her success at the World Championships and Diamond League levels. Just a few months ago, at the IAAF world championships in Doha, Qatar, Shelly-Ann proved her GOAT status once more by winning her signature event, the 100-meter sprint. After crossing the finish line, a beaming Shelly-Ann was joined on the track by the source of her support and motivation: her 2-year-old son, Zyon.

Shelly-Ann is part of a wave of athletes, including Allyson Felix, who are proving to the world that a successful post-maternity track career is possible. Two years ago, when Shelly-Ann found out she was pregnant, that didn’t seem to be the case.

“I took 10 tests,” she said, speaking to POPSUGAR ahead of her appearance at the 10th annual ESPN W Women + Sports Summit. “I was like, this can’t be real.” Shelly-Ann had been planning to defend her world title in the 100-meter that same year. Getting pregnant threw her goals into flux and, more worryingly, raised the question of what would happen with her sponsorships. (Allyson Felix and others have been vocal about their pregnancy-related sponsorship battles with companies like Nike.) “You’re an athlete. That’s how you make a living, by running,” Shelly-Ann said. “I was a nervous wreck.”

Eventually, though, she came to a decision: to embrace the situation, take a break to have her son, and come back to run again. “I decided I wasn’t through,” Shelly-Ann remembered. “I had more to give.”

To have Zyon join her on the track for a victory lap, after winning her first world title since giving birth, “was a moment that I could relive over and over,” Shelly-Ann said, because Zyon himself was why she’d been so determined to make a comeback. “If I win, Zyon wins,” Shelly-Ann said. Being a role model for him, showing him that he can accomplish anything he sets his mind to, was her biggest motivation. “I need him to see this moment and understand that, ‘After my mommy had me, she was able to come back at 32 and win a world championship. So I can do anything in my lifetime.'”

Next on the schedule for Shelly-Ann are the 2020 Olympic Games in Tokyo, but she says she’s not thinking about that just yet. “For me, it’s a day at a time,” she said. “You can’t focus too much on the end result. Focus on the process and the work that you need to get there.” That’s the mindset that’s kept her going through a 12-year international career: not getting caught up in the biggest moments, but concentrating on every small step it takes to get there: “It’s just being grounded. It’s knowing why you started.”

Taking home that 2019 world title was an “unbelievable” feeling, Shelly-Ann recalled. “I’ve worked really hard in the last two years to come back. Just to actually get to that line and win that gold medal, it made me feel so strong and so confident.”