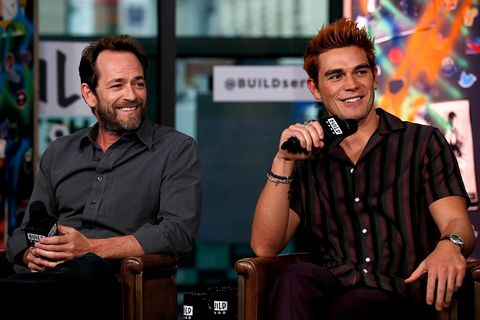 Last night’s Riverdale premiere marked the beginning of season four—and an emotional ending for one of its beloved characters. Cast and fans alike gathered to pay tribute to Luke Perry, who passed away in March of a stroke at age 52.

In the series, Perry played Fred Andrews, father of KJ Apa’s Archie. During the episode, Archie discovers his father was killed in a hit-and-run when he stopped to help a stranded motorist, played by Perry’s Beverly Hills, 90210 co-star Shannen Doherty. Archie and his friends share memories of Fred as they mourn; IRL, the cast shared memories on social media as the episode aired.

Ahead of the season opener, Riverdale creator Roberto Aguirre Sacasa tweeted, “Tonight Season 4 of #Riverdale premieres. With an episode that honors our friend Luke. It’s an episode that’s bursting with sadness, but even more so with love. I’m humbled by the outstanding work everyone did on it. I hope you like it, Luke. We miss you every day. ” Below, a roundup of cast and fan tributes to Luke Perry.

Reinhart posted a pair of cast photos including Perry, captioned, “Tonight’s episode, and all episodes for the rest of our run, are for Luke. We love, honor, and cherish his memory every single day. I only wish he were here to see how many lives he touched with happiness and laughter. I know he’s watching from above. We love you, Luke.”